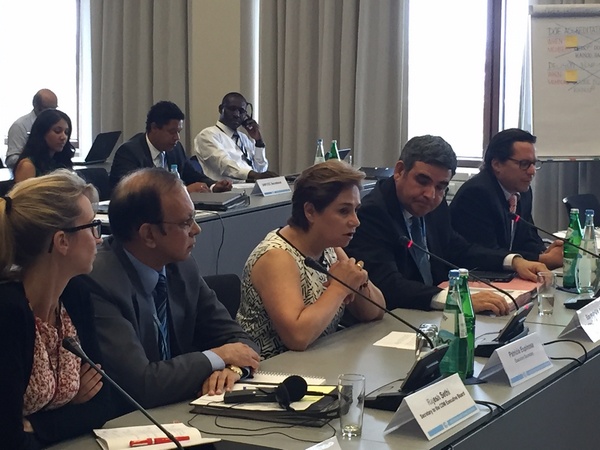 Clean Development Mechanism Model for Climate Action on the Ground

Bonn, Germany, 22 July 2016 – As countries strive to increase action on the ground to address climate change, they can draw on the success of the Clean Development Mechanism (CDM), said the United Nations’ top climate change official, Patricia Espinosa.

In December 2015, Parties under the UNFCCC adopted the Paris Climate Change Agreement, pledging to take on increasingly ambitious emission reduction targets aimed at keeping global temperature rise to at most 2 degrees Celsius above pre-industrial levels. The agreement also includes tools to help countries achieve their ambitions, including markets and mechanisms.

With adoption of the Paris Agreement, the focus of countries is shifting to implementation, including development and use of a sustainable development mechanism, as well as non-market approaches.

“At the national level, it means turning nationally determined contributions into actionable plans – leading to action on the ground,” said Ms. Espinosa, a guest at the 90th meeting of the CDM Executive Board. “As countries work to accelerate climate action, it is worthwhile that they reflect on the success of the CDM, with its many thousands of projects on the ground.”

CDM Executive Board Chair Eduardo Calvo welcomed the Ms. Espinosa, who just this week took up her duties as Executive Secretary of the United Nations Framework Convention on Climate Change (UNFCCC). “We wish you all the best in your role as Executive Secretary, in this your first year and particularly in Marrakesh,” said Mr. Calvo.

Countries will meet under the UNFCCC in November in Marrakesh, Morocco, where they will work towards implementing the landmark agreement reached in Paris.

Under the CDM, projects in developing countries earn a saleable credit for each tonne of greenhouse gas they reduce or avoid. The incentive has led to the registration of more than 8,000 projects and programmes in more 105 countries and the issuance of more than 1.6 billion certified emission reductions (CERs). Countries can use CERs to meet a part of their emission reduction commitments under the Kyoto Protocol.

Demand for CERs has declined, and with it the incentive to set up projects. Now Parties’ attention has turned to markets and mechanisms under the Paris Agreement, described in its Article 6, and they are looking at what can be learned or borrowed from the CDM.

The Board is promoting demand for the CDM, for example encouraging use of the mechanism for results-based financing, quality assurance of green bonds and voluntary offsetting of emissions by organizations, companies and individuals through an initiative called Climate Neutral Now.

Also at the meeting, the Board decided to spread out the fees paid by the designated operational entities (DOEs) that validate and verify CDM projects and emission reductions. The intention is to make servicing the CDM more attractive to existing and potential DOEs.

For a full report of the meeting please visit http://cdm.unfccc.int/EB/index.html

The Paris Agreement calls for climate neutrality in the second half of the century. To go Climate Neutral Now! visit http://climateneutralnow.org/SitePages/Home.aspx

For on-demand webcast of the remarks by Patricia Espinosa please visit http://unfccc6.meta-fusion.com/cdm90/events/2016-07-18-09-30-cdm-eb-90/interaction-with-the-unfccc-executive-secretary-ms-patricia-espinosa