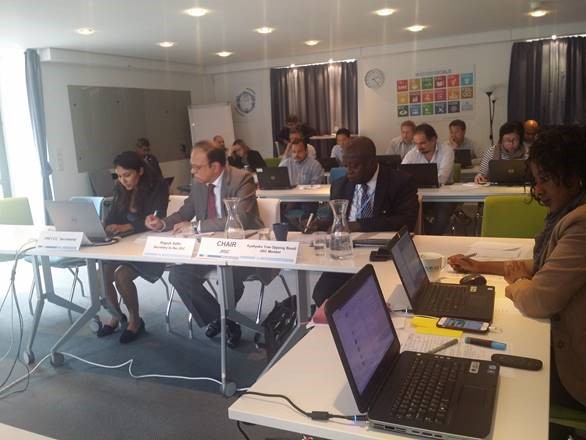 17 September 2019 – The Joint Implementation Supervisory Committee (JISC) held its forty-second meeting, for the second time in a virtual environment, building on its experience last year.

Prior to the meeting, members voted electronically to elect Mr. Kyekyeku Oppong-Boadi, National Focal Point, Ghana, as Chair, and Ms. Vanessa Leonardi, an expert at the Italian Ministry for the Environment Land and Sea, as the Vice-Chair. Both will serve in their executive capacities until the first meeting of the JISC in 2020.

The JISC continues to utilize cost-effective tools, such as electronic consultation, electronic decision-making and virtual participation in meetings, learning from the experiences of its meeting held last year.

Pending the entry into force of the Doha Amendment, work pertaining to Joint Implementation is minimal. This was reflected in the agenda of the meeting, which was fairly light, and took just under two hours to complete.

One of the meeting’s main outcomes was the adoption of a two-year Management Plan for 2020 and 2021, where the JISC agreed to revisit the budget for 2021 at its meeting next year in light of any relevant decision of the Conference of the Parties serving as the meeting of the Parties to the Kyoto Protocol (CMP) on the JI.

The JISC also agreed on its annual report to be presented to the CMP at its fifteenth session (CMP 15) in Chile in December this year and included a recommendation for the CMP to consider matters related to the second commitment period of the Kyoto Protocol (KP) and future operations of the JI mechanism. The JISC also recommended that the CMP invite the Conference of the Parties serving as the meeting of the Parties to the Paris Agreement to continue using the experience gained and lessons learned from JI to inform the implementation of Article 6 of the Paris Agreement.

Designated Operational Entities (DOEs; third-party project validators and emission-reduction verifiers) accredited under the Clean Development Mechanism, the other project-based mechanism under the KP, were given the green light by the JISC to continue, on a voluntary basis, as JI Accredited Independent Entities (AIEs) to perform determinations and verifications under JI. The JISC noted that seven DOEs have submitted self-declarations, expressing their interest to act voluntarily as AIEs.

The second commitment period of the Protocol has yet to come into force. Thus, JI currently suffers from a lack of demand.