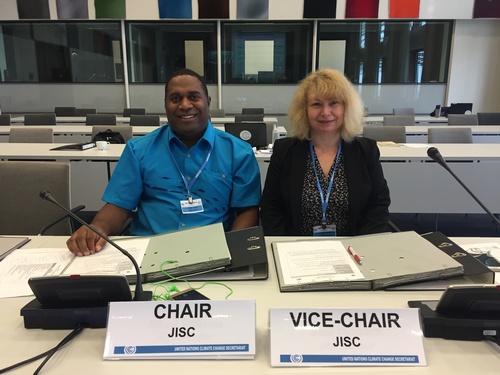 JISC elects Chair and Vice-Chair for 2017

Bonn, Germany, 19 May 2017 – The Joint Implementation Supervisory Committee (JISC) at its 40th meeting held on 19 May elected Mr. Albert Abel Williams, Member of Parliament, Vanuatu, and Ms. Gherghita Nicodim, Counselor at the Ministry of Environment, Romania, as Chair and Vice-Chair, respectively.

Mr. Williams takes over from Konrad Raeschke-Kessler, who remains a member, and Ms. Nicodim takes over from Mr. Albert Abel Williams. Both will serve in their executive capacities until the first meeting of the JISC in 2018.

The JISC adopted the two-year management plan 2018-2019 with the objectives of i) maintaining the infrastructure and capacity to ensure JI operations and ii) share the experiences gained and lessons learned to provide further information and recommendations for the development of rules to operationalize Article 6 of the Paris Agreement.

In the spirit of prudent management of resources, the JISC also decided to consult electronically with members for any decision making during the year.

The second commitment period of the Protocol, agreed to by Parties, has yet to come into force. Thus, JI currently suffers from lack of demand and its future role is uncertain.

Under JI there are two “tracks” by which projects can apply for approval: Party verification and verification by an international independent body, the JISC. The JISC answers ultimately to the Parties that have ratified the Protocol.