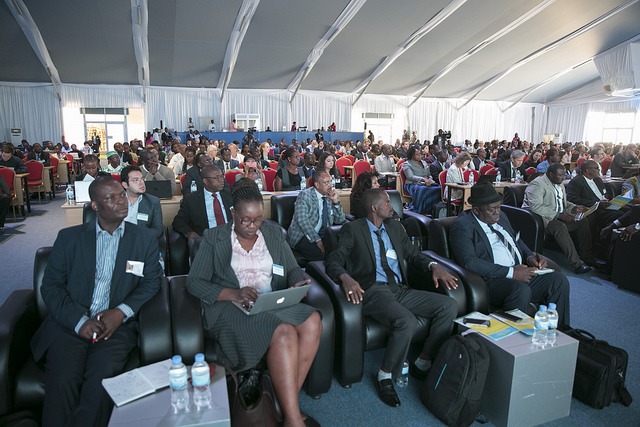 “Development must simply be sustainable. Otherwise it is not development,” said Vincent Biruta, Minister of Natural Resources of Rwanda. “We can only meet the Sustainable Development Goals if we deal with climate change.”

Mr. Biruta stressed the importance of cooperation, between the public, civil society and the private sector and between governments, as well as the need to ease access to multilateral support for climate action “so that national governments can focus on implementation.”

Rhoda Peace Tumusiime, the African Union’s Commissioner for Rural Economy and Agriculture, applauded the fact that most countries in the run-up to the Paris Climate Change Agreement in December 2015 spelled out how they intend to address climate change, but she challenged countries to do more.

“We need good, coordinated effort at the country level,” said Ms Tumusiime. She also called for Africa to receive its fair share of pledged climate finance and encouraged countries to adopt policies that incentivize private sector action on climate change.

Mahama Ayariga, Minister of Environment, Science, Technology and Innovation, Ghana, tore down the distinction between climate finance and all other types of finance.

Ephraim Kamuntu, Minister for Tourism, Wildlife and Antiquities, Uganda brought the dangers and costs of climate change into focus.

Uganda’s greenhouse gas emissions account for only a fraction of one percent of global emissions, but two recent events related to climate change claimed 300 lives and cost half a billion dollars to repair key infrastructure, including clinics and roads.

Uganda’s contribution to climate change is very small, “but in terms of impact, it’s out of proportion,” said Mr. Kamuntu, who called on climate funding pledges to be honored and funds made available quickly.

Mohamed Benyahia, Director of Partnership, Communication and Cooperation, Morocco, stressed the need for integration of the non-state actors – the private sector, civil society and non-state constituencies – in the international response to climate change.

Morocco will host the next major International Climate Change Conference, in Marrakesh in November this year. Mr. Benyahia described the “vision and roadmap” of meetings and consultations aimed at integrating participation of non-state actors in the conference and the processes of the United Nations Framework Convention on Climate Change. Morocco is looking to mobilize South-led initiatives and cooperation, including by engaging private sector companies and women as agents of change.

Speakers this week highlighted the opportunity, and indeed need, for Africa to link mitigation action to resilience and green growth, in the context of the ambitious targets in the African Union’s Agenda 2063. Efforts to increase resilience, linked with economic benefits and jobs, can increase relevance of mitigation actions for local communities.

The important role of capacity-building was also raised several times in the high-level sessions, and in sessions on the previous two days of the event, especially the need for technical assistance in preparing project proposals that can attract private finance.

More in the news: http://unctad.org/en/Pages/MeetingDetails.aspx?meetingid=1166