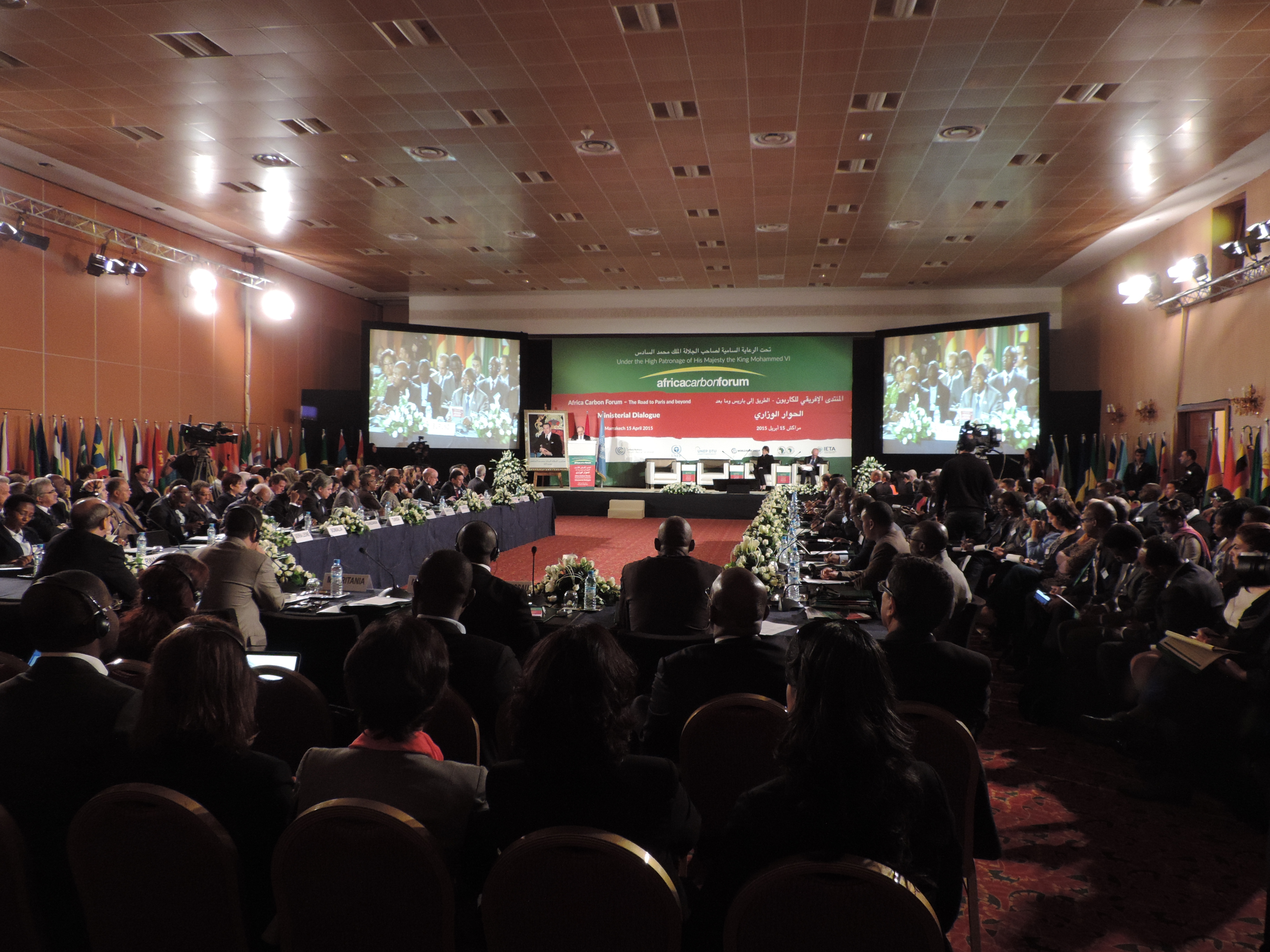 Private and Public Sectors Join in Quest for Market and Finance Opportunities at 7th Africa Carbon Forum
(Marrakech, Morocco, 16 April 2015) – Ministers from governments across Africa have renewed their call for a strong and universal climate change agreement with increased flows of funds, including through market and finance opportunities, sufficient to fulfill Africa’s development aspirations.

“I agree with Ministers that the last 10 years in the implementation of the Clean Development Mechanism is a very valuable asset and that market mechanisms can play a significant role in raising the level of ambition, and supporting climate action,” said Ms. Hakima El Haite, Delegate Minister in charge of Environment of Morocco.

“In these last eight months before Paris, the focus must shift from restating negotiating positions to finding common ground solutions,” said UNFCCC Deputy Executive Secretary Richard Kinley at a day-long ministerial segment at the Africa Carbon Forum 2015 hosted by the Kingdom of Morocco. “All countries have something to gain from the Paris agreement and it is in everyone’s interests to reach a strong conclusion as soon as possible this year. If Heads of State come to Paris, it must be to adopt an agreement that is robust and ready for them.”

The African Carbon Forum 2015 focused on programmes to unleash private sector finance, such as through the Clean Development Mechanism, and scale up other forms of climate finance to strengthen the sustainable development of African countries.

According to the International Energy Agency Africa Energy Outlook 2014, 625 million people in Sub-Saharan Africa, about two-thirds of the population, are without secure access to electricity. Some 730 million people in the region still rely on cooking mostly with wood, harming health and destroying vital forest cover.

“The coming months provide African countries with a significant opportunity to align their contributions to the Paris climate agreement with their own long-term sustainable development priorities,” said Mr. Kinley.

Countries are busy detailing their Intended Nationally Determined Contributions (INDCs), which they will submit as their contribution to climate action under the Paris agreement. INDCs for 35 countries have been submitted to date. On April 1, Gabon became the first African country to submit an INDC.

Climate Finance and a Strong CDM Are Key to Success

Two clear messages emerged from participants at the African Carbon Forum. First, linking climate finance to results is essential to stimulate greater funding for both mitigation and adaptation to climate change. Second, developing countries, including Africa, need tools like the Clean Development Mechanism if they are to successfully shift to a low-carbon emitting development path. Paris provides the continent with a unique opportunity to anchor carbon markets in the long-term climate agenda in line with scaling up climate action and sustainable development based on their national priorities.

A consistent theme during the Forum was the need to preserve and improve the CDM beyond 2020 as a tool for providing continued climate finance and technology to developing countries, especially in Africa. This would capitalize on the capacity and infrastructure already built up by countries and stakeholders. It is widely expected that this will be one of the issues to be resolved in Paris.

Participants particularly highlighted the usefulness of the CDM’s established rules in measuring, reporting and verifying results and its possible role to help define and clarify the content of  INDCs. The workshop also concluded that African countries could look at how best to link and leverage finance through the Green Climate Fund at the same time as increasing use of the CDM.

The Forum noted that the INDCs provide Africa with an ideal vehicle through which public policy developments can be transparently displayed by countries to shift toward a low-carbon and sustainable development path.

“Throughout this African Carbon Forum, I have sensed the extraordinary will of the continent to act, and to use the tools that are functioning and at their disposal now, such as the Clean Development Mechanism. I share the sentiment expressed by many participants here, that it is time to support Africa's dynamism in particular by exploring how the GCF can channel climate finance for the implementation of CDM projects in Africa, and finally unleash the continent's mitigation potential. With the Paris agreement in mind, I trust that African countries will reflect this reality in their INDCs.”
John Kilani, Director, Sustainable Development Mechanisms programme, UNFCCC

“The African Carbon Forum 2015 has clearly demonstrated the engagement and commitment by countries in the region to contribute to a balanced and fair outcome at the COP in Paris. Countries are preparing their INDCs, and presentations at the Forum indicate that these will have both ambition and at the same time send clear signals of the need to balance adaptation and mitigation aspects within a broader green economy development framework.”
John Christensen, Director, United Nations Environment Programme DTU Partnership

“Here’s what participants at the Forum are saying: a clear and fair global climate architecture, which can protect the more vulnerable regions, such as Africa, needs to be a part of the Paris narrative. Participants are demonstrating a very high level of commitment to helping the Paris process hear Africa’s voice in getting climate policies right.”
Neeraj Prasad, Manager, Climate Change Group, World Bank Group

“As we move towards the goal of a global climate change agreement in Paris in December, the 7th Africa Carbon Forum reinforced the need to have adequate, predictable, sustainable climate finance resources  to address Africa’s challenges in transitioning to low carbon development, smart agriculture, and sustainable urban development ­ key topics at this year’s ACF. These areas should be at the core of Africa’s development priorities and how they are integrated into the countries’ INDCs will help determine the successful implementation of INDCs beyond Paris. We all know current climate financial flows are currently insufficient to meet all of Africa’s climate change challenges, but it will be critical for African countries to demonstrate the ability to effectively deploy those resources that are available to help contribute to the global climate change goals.”
Kurt Lonsway, Manager, Environment and Climate Change Division, African Development Bank

“As we've heard over the past couple of days, there is a great opportunity for the private sector to invest in a low carbon future for Africa, using market forces to bring innovative technologies so that the continent can develop in a sustainable way. The Paris agreement can help facilitate this by setting the right parameters for business to invest, including agreeing rules and guidelines for carbon markets.”
Dirk Forrister, President and CEO of International Emissions Trading Association

This year’s Africa Carbon Forum attracted over 600 participants of 53 countries, including 23 ministers or senior officials, policymakers, project developers and investors, and built on the success of last year’s forum in Windhoek, Namibia. Discussions centered on international and national policies and operational issues related to carbon markets, mechanisms and finance.

The Forum is organized under the umbrella of the Nairobi Framework by the UNFCCC, United Nations Environment Programme along with the UNEP-DTU Partnership, World Bank, African Development Bank and the International Emissions Trading Association.

The Nairobi Framework was launched in 2006 by then UN Secretary-General Kofi Annan to assist developing countries, especially in sub-Saharan Africa, to improve their level of participation in the Kyoto Protocol’s Clean Development Mechanism.