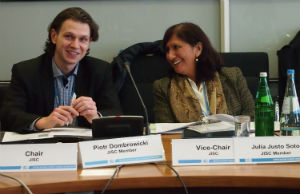 Bonn, 18 March 2014 – The committee responsible for supervising the Kyoto Protocol’s Joint Implementation mechanism has adopted a plan to sustain the mechanism through 2014 and beyond while contributing to its ongoing evolution as an effective tool for climate change mitigation.

The Joint Implementation Supervisory Committee (JISC) at its 34th meeting agreed to continue to contribute to the development of JI, adjust its communication and outreach to ensure stakeholders and policymakers understand the benefits of JI, and ensure the continued operation of the mechanism, by among other ways strengthening policy guidance to ensure clarity and improved usability in the short and long term.

“We will continue to implement and improve this mechanism, and we will continue to point out to the policymakers crafting an international climate change agreement that JI must endure and evolve,” said Piotr Dombrowicki, who was elected Chair at the meeting.

In the past few years, the JISC has been instrumental in coming up with improvements in the way JI operates. Parties to the Kyoto Protocol are expected to agree on new rules for JI when they meet in Lima, Peru, at the end of 2014, based largely on the JISC’s recommendations, including for a streamlined mechanism with broader, more effective oversight.

“The international community has just a few workable tools to incentivize private-sector investment in climate change mitigation; the Joint Implementation mechanism is one of them,” said Mr. Dombrowicki. “I think whenever countries stop to truly consider this fact they conclude that JI is an effective tool that should be usefully deployed as part of the international response to climate change.”

The JI mechanism, which rewards with saleable units projects that reduce or avoid greenhouse gas emissions, is facing difficulty due mainly to low demand, ultimately tied to countries’ level of ambition to reduce greenhouse gas emission. The JISC is also challenged critically by the fact that JI units are created by converting a portion of a country’s total allowable emissions, so-called assigned amount units, which for the current commitment period of the Protocol have yet to be issued.

Also at its 34th meeting, the JISC devoted significant time to its system for accrediting and overseeing the work of the third-party entities that ensure projects comply with JI rules and that emission reductions produced by projects represent real reductions. The JISC decided to in part use the accreditation system of the Kyoto Protocol’s other market-based mechanism, the clean development mechanism (CDM), subject to endorsement by that mechanism’s governing body. The JISC also decided to recommend that Parties to the Protocol closely align JI’s current accreditation system and that of the CDM.

Mr. Dombrowicki, an environmental specialist and civil servant from Poland, served as Vice-Chair last year and takes over from Derrick Oderson of Barbados, who remains a member. The JISC elected Julia Justo Soto as Vice-Chair. Ms. Justo Soto is Executive Director of the National Environmental Fund (FONAM) in Peru. Both will serve in their executive capacities until the first meeting of the JISC in 2015.

For a full report of the meeting see <ttp://ji.unfccc.int/Sup_Committee/Meetings/index.html.