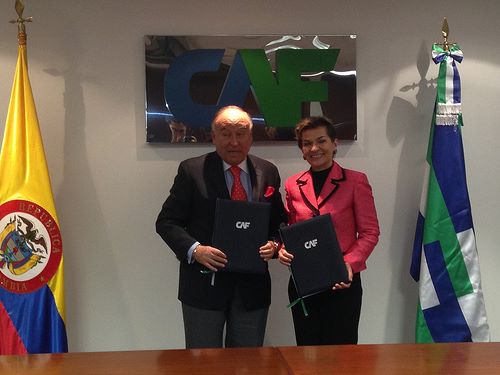 (Bonn, 22 August 2013) – In an effort to bring the benefits of the Kyoto Protocol’s clean development mechanism (CDM) to currently underrepresented countries in Latin America the United Nations Framework Convention on Climate Change (UNFCCC) secretariat has joined with the development bank of Latin America (CAF) to establish a CDM regional collaboration centre (RCC) in Bogotá, Colombia.

“The CDM has demonstrated what can be achieved when we use markets to incentivize action on climate change and development,” said UNFCCC Executive Secretary Christiana Figueres. “The RCC in Bogotá will help tap the potential for CDM projects in Latin America and serve as a working example of the kind of inter-agency cooperation necessary to tackle climate change.”

The office in Bogotá will become operational on 1 September 2013 and provide support in all countries in Latin America. CAF Executive President Enrique García praised the cooperation agreement as an important step for sustainable economic growth. “Through development and financing of such innovative projects we are helping to combat global warming and promote the use of clean and renewable energy in the region. We are honored that the UNFCCC has chosen us as the only Latin America centre that can pave the way towards a low-carbon economy,” said Enrique García.

The RCC in Bogotá, Colombia will:

About the CDM
The clean development mechanism (CDM) allows emission-reduction projects in developing countries to earn certified emission reductions (CERs), each equivalent to one tonne of CO2. CERs can be traded and sold, and used by industrialized countries to meet a part of their emission reduction targets under the Kyoto Protocol. With more than 7,183 registered projects in 89 developing countries, the CDM has proven to be a powerful mechanism to deliver finance for emission-reduction projects and contribute to sustainable development.

About the UNFCCC
With 195 Parties, the United Nations Framework Convention on Climate Change (UNFCCC) has near universal membership and is the parent treaty of the 1997 Kyoto Protocol. The ultimate objective of both treaties is to stabilize greenhouse gas concentrations in the atmosphere at a level that will prevent dangerous human interference with the climate system.

About the CAF
The development bank of Latin America (CAF), is a multilateral financial institution that mobilizes resources from international markets to Latin America, in order to provide multiple financial and technical assistance services to public and private sector clients in shareholder countries. The institution is committed to sustainable development and regional integration. Headquartered in Caracas, CAF was established in 1970.