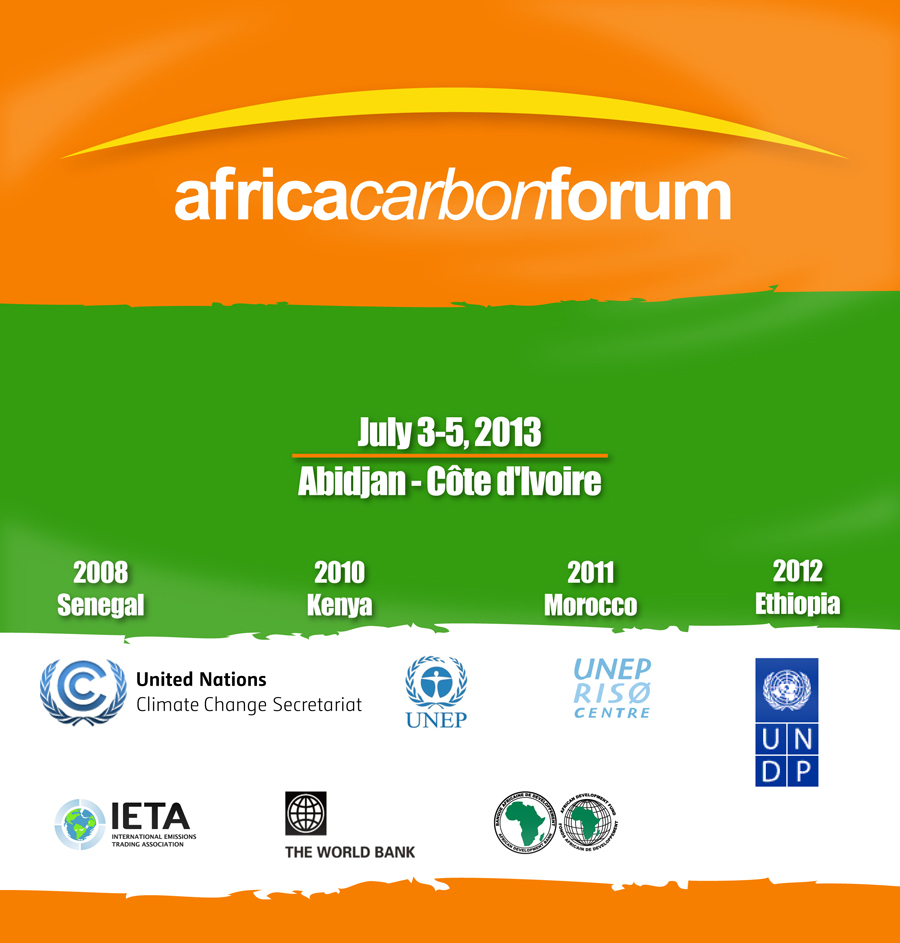 (Abidjan, Côte d’Ivoire, 5 July 2013) – The ground has been prepared for scaled up participation by Africa in carbon markets, a development that could benefit the continent and the climate as a result, participants in the fifth Africa Carbon Forum in Abidjan heard this week.

Despite a strong headwind in the form of low prices paid for certified emission reductions (CERs), steady improvements in the Kyoto Protocol’s clean development mechanism (CDM) and the possibility of new sources of demand have kept an interested core of stakeholders engaged in the market. This year’s forum attracted 600 participants for the three-day programme of presentations, buyer–seller match-making sessions and exhibitions. The forum was opened by the prime minister of Côte d’Ivoire, Daniel Kablan Duncan, whose speech offered a powerful demonstration of commitment to support the carbon market in the country.

“Prices are low, but they’ll go up again when countries take on the level of ambition that is needed to tackle climate change,” said Peer Stiansen, Chair of the CDM Executive Board. “When countries do begin to really cut their greenhouse gas emissions, then the CDM and mechanisms like it will be indispensable.”

In the meantime, the CDM Board and dedicated stakeholders are making important improvements to the CDM, such as developing sector-specific standardized baselines against which projects and their emission reductions can be assessed. Recently, the Board approved two such baselines, one covering power projects in the Southern African Power Pool and one covering charcoal projects in Uganda. Such standardized baselines have the potential to reduce transaction costs, simplify requirements, and enhance predictability, transparency and objectivity of the mechanism.

“The CDM has evolved and improved a great deal in the past number of years. The changes are all aimed at making the mechanism more effective,” said Mr. Stiansen. “That will help Africa, which to date has not fully benefited from the CDM, and it will contribute to the international response to climate change.”

Just a little more than two percent of the 7000 registered CDM projects are in Africa. However, there are clear signs of improvement, including Africa hosting nearly a third of the 178 registered programmes of activities (PoA), under which an unlimited number of smaller projects over a wide area can be registered under a single programme umbrella. The PoA approach, standardized baselines, loan scheme, regional collaboration centres, and other measures being pursued are expected to help extend the CDM into underrepresented countries and regions.

One such other measure is the World Bank’s Carbon Initiative for Development (Ci-Dev), which focuses on access to energy and is designed to allow projects in least developed countries to benefit from a revenue stream from emission reductions that simultaneously provide development benefits to communities and households.
Participants in the fifth Africa Carbon Forum learned about the latest national and international policy developments, such as prospects for new market-based mechanisms to enhance the cost-effectiveness of climate mitigation actions. A variety of mitigation instruments were discussed, including domestic cap-and-trade, low-emission development strategies and nationally appropriate mitigation actions.

The Forum builds on a growing interest in pursuing low-carbon pathways in Africa, which now hosts 152 CDM projects in 26 countries. The event, which was preceded by a two-day training session of the African designated national authorities, is organized under the umbrella of the Nairobi Framework. Launched in 2006 by then UN Secretary-General Kofi Annan, the Nairobi Framework aims to assist developing countries, especially those in sub-Saharan Africa, to improve their level of participation in the CDM.

What the organizers say about the CDM in Africa

“The efforts of the CDM Executive Board and UNFCCC secretariat to increase Africa’s participation in the CDM are ongoing. Within only a year, the CDM loan scheme, which provides interest-free loans for projects in least developed nations, has approved 35 loans and committed over $3 million of funds. Moreover, the UNFCCC secretariat has helped to launch two regional collaboration centres in Africa -- one in Lomé, Togo and another one in Kampala, Uganda -- providing on-the-ground support in an effort to increase the regional distribution of CDM projects. We will be working hard to help ensure their success and will be looking closely at the results of their efforts.”
John Kilani, director of the Sustainable Development Mechanisms programme, UNFCCC

“Last month, the World Bank commissioned the second phase of a scientific report entitled ‘Turn Down the Heat: Why a 4°C Must Be Avoided’ that looks at the likely impacts of a 2°C and 4°C warming across Sub-Saharan Africa and other regions in the 21st Century. For Africa, the picture is clear: climate change is expected to exert further pressure on ecosystems and key sectors, with repercussions for the human populations dependent on them. The challenge for us as the World Bank is to reconcile a dual vision: the reality of the impacts of climate change, and the opportunities that come with building more resilient, low-carbon countries, cities and communities. The fifth Africa Carbon Forum was an important step in that direction, providing a knowledge-exchange platform and networking space for low carbon investments in Africa."
Neeraj Prasad, Manager of the World Bank Institute’s Climate Change Practice

“Stakeholders’ continuous interest in carbon finance promises climate change mitigation at scale. We are confident that Africa will be able to increase its access to carbon finance -- in particular through Nationally Appropriate Mitigation Actions -- and deliver not only mitigation, but true sustainable development throughout the continent.”
Marcel Alers, Head of Millennium Development Goals (MDG) Carbon, UNDP

“One of the crucial issues discussed at the African Carbon Forum 3 years ago, was the limitations in the CDM rules that practically excluded a number of countries around South Africa benefiting from the carbon market, Now 9 dedicated, grid connected member countries of the Southern African Power Pool, the UNFCCC, UNEP and UNEP Risoe Centre with the financial support of the German Government, have removed some of the barriers. We now have a common grid emission factor, approved as a Standardized Baseline which allows all new renewable energy installations to enjoy the same access to carbon finance, no matter where among the grid connected SAPP members it is connected. This is indeed a positive development that more African countries can benefit from the Carbon market.”
John Christensen, Director, UNEP Risoe Centre

“With 600 attendees, this year's Africa Carbon Forum offered a powerful demonstration of the commitment of governments, businesses and multilateral institutions to find new models of partnership on carbon reduction projects. Given the current challenges of global carbon markets, business leaders here came ready to champion innovative models that blend voluntary markets, climate financing structures and CDM. It was encouraging to see a strong interest in continuing the progress of carbon market solutions for Africa.”
Dirk Forrister, President & CEO of IETA