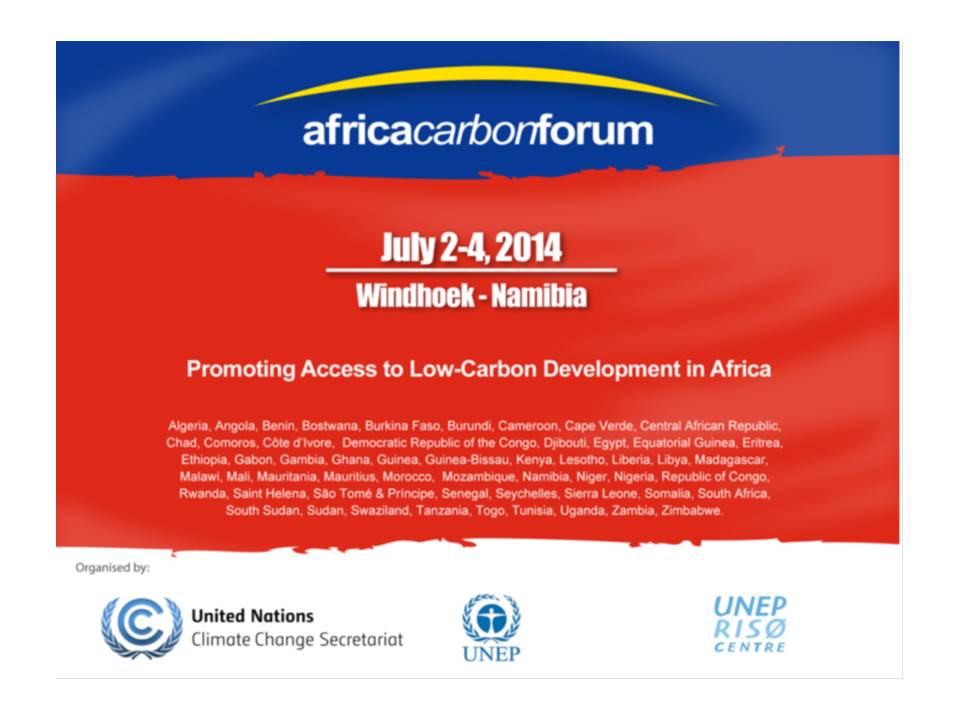 Bonn, 22 May 2014 - The sixth Africa Carbon Forum will take place in Windhoek, Republic of Namibia, on 2-4 July 2014 to support Africa's participation in global carbon markets and catalyze green investment opportunities.

This year’s forum is an opportunity for participants to learn about the present and future of carbon markets, sources of climate finance, international climate change negotiations, examples of low-carbon development strategies, and the opportunities to use carbon credits generated by the Clean Development Mechanism (CDM) more easily for voluntary purposes, in addition to their use in compliance markets.

“Despite the current lull in the carbon market, steady improvements in the CDM and the possibility of new sources of demand will keep an interested core of stakeholders engaged in the market,” said Hugh Sealy, the chair of the CDM Executive Board. “Now is the time for African nations to look for opportunities in the CDM, in particular via a programme approach, which opens the door to a great number of smaller projects.”

Participants will learn from experts in the public and private sectors about the developments around Nationally Appropriate Mitigation Actions (NAMAs), Reducing Emissions from Deforestation and Forest Degradation (REDD+), New Market Mechanisms (NMMs) and the Framework for Various Approaches (FVA).

Emphasis will also be placed on the programmatic approach, i.e. PoAs, which is particularly suited to small or micro-scale projects that are common in Africa. Under PoA, similar projects can be integrated under one ‘programme umbrella’ reducing transaction costs and making the mechanism more attractive and accessible to least developed countries. Of the 252 PoAs registered globally, an impressive 78 are in Africa, representing more than 30 per cent of existing PoAs.

The Africa Carbon Forum 2014 builds on the success of last year’s forum in Abidjan, Côte D’Ivoire, which brought together more than 700 policy-makers, project developers and investors from five continents. It provided an opportunity to exchange views, share knowledge and learn more about the latest international and national policies and operational issues related to carbon markets.

The forum is organized under the umbrella of the Nairobi Framework, which was launched in 2006 by then Secretary-General Kofi Annan with the aim to assist developing countries, especially those in sub-Sahara Africa, to improve their level of participation in the CDM.

About the CDM
The clean development mechanism (CDM) allows emission-reduction projects in developing countries to earn certified emission reductions (CERs), each equivalent to one tonne of CO2. CERs can be traded and sold, and used by industrialized countries to meet a part of their emission reduction targets under the Kyoto Protocol. With more than 7,500 registered projects and more than 250 registered programmes of activities in 105 developing countries, the CDM has proven to be a powerful mechanism to deliver finance for emission-reduction projects and contribute to sustainable development.

About the UNFCCC
With 196 Parties, the United Nations Framework Convention on Climate Change (UNFCCC) has near universal membership and is the parent treaty of the 1997 Kyoto Protocol. The Kyoto Protocol has been ratified by 192 of the UNFCCC Parties. For the first commitment period of the Kyoto Protocol, 37 States, consisting of highly industrialized countries and countries undergoing the process of transition to a market economy, have legally binding emission limitation and reduction commitments. In Doha in 2012, the Conference of the Parties serving as the meeting of the Parties to the Kyoto Protocol adopted an amendment to the Kyoto Protocol, which establishes the second commitment period under the Protocol. The ultimate objective of both treaties is to stabilize greenhouse gas concentrations in the atmosphere at a level that will prevent dangerous human interference with the climate system.